What is a Moscow Mule? 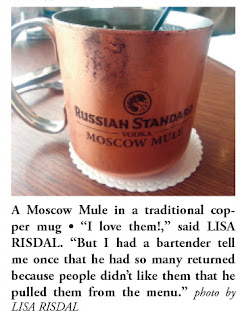 Two of my friends have recently become obsessed with Moscow mules. One of them asked me, "You know a lot about mules, so why do they call it a Moscow 'mule'?" I honestly had no clue, so I did some research.
First, a Moscow mule is a buck or mule cocktail with vodka, ginger beer, and lime juice, garnished with a wedge of lime.
Buck and mule cocktails are slightly antiquated names for a family of historic mixed drinks that involve ginger ale or ginger beer, citrus juice and any number of base liquors. They are forgiving drinks, designed to be made quickly.
Legend has it that the Moscow mule was created in the 1940s when two businessmen, one selling vodka and the other ginger beer, couldn't move their products. They sat down together at the Hollywood restaurant The Cock 'n' Bull, owned by the man who sold the ginger beer, and combined the two with lime juice, and this became the Moscow Mule: "Moscow" for the Russian origins of vodka, and "mule" because it was a "mule" or "buck" cocktail.
It is usually served in a copper mug, which keeps the drink colder longer without needing as much ice. Also, the acidic lime juice tastes sharper and crisper against the metal cup.
There are lots of variations available, but one Mule Girl, Beth Tolhurst, came up with a twist she calls a “Red Mule.” Mix orange vodka, ginger beer, and a splash of cranberry juice, and garnish with a lime slice.

Fill a glass or copper mug with ice. Add vodka and lime juice, top with ginger beer. Garnish with lime. Makes one drink.
Check out our Moscow Mule Pinterest board for more recipes: pinterest.com/mulesandmore/moscow-mule/ 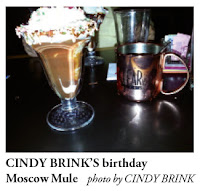