“The hardest working and most neglected of all our domestic species” 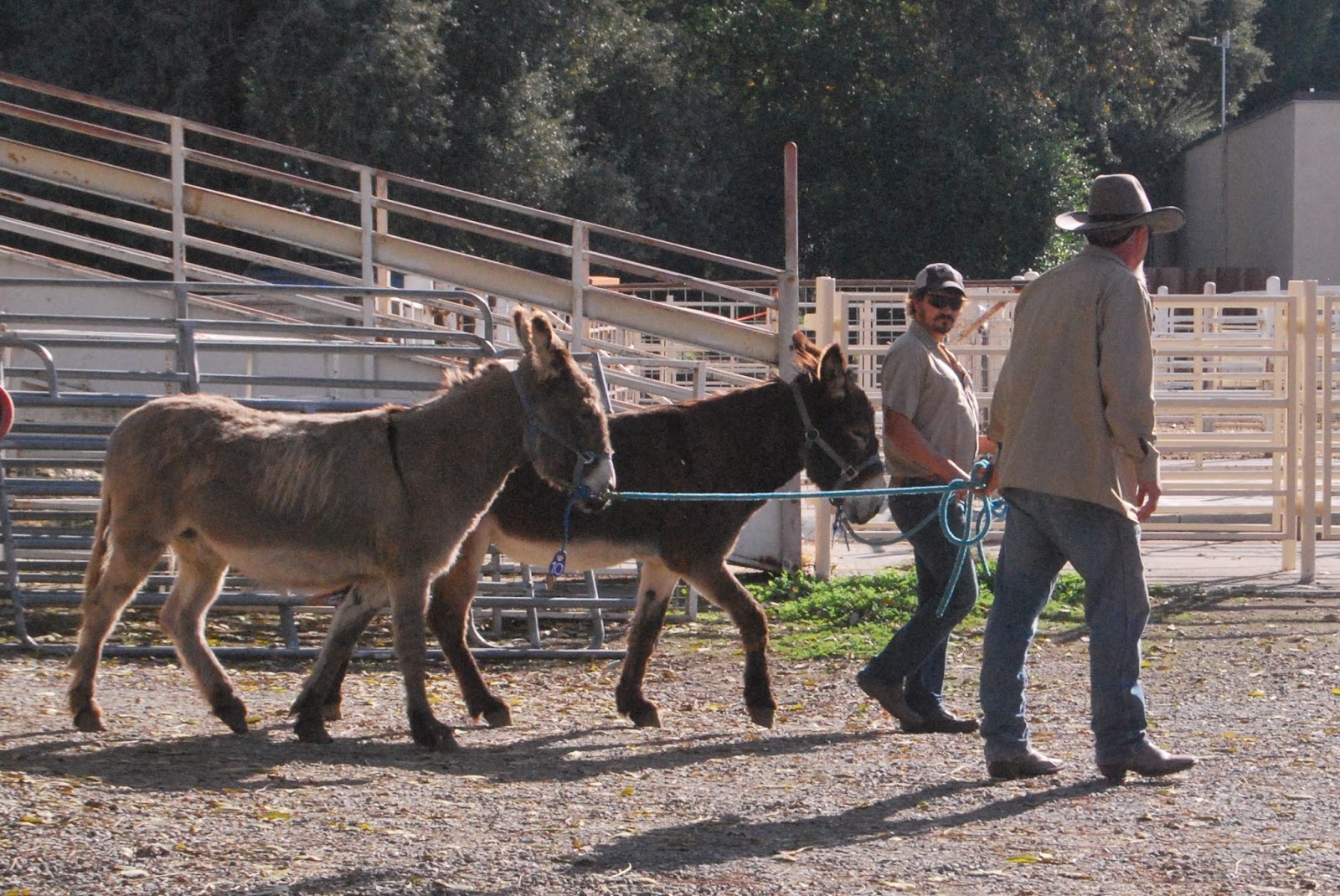 November 7-9, 2014 was the date for the Second Annual Donkey Welfare Symposium hosted by UC Davis School of Veterinary Medicine at Davis, California. It was sponsored by the International Animal Welfare Training Institute, UCD, the Office of Continuing Education, UCD, the Animal Science Department, UCD, and the Donkey Sanctuary, Sidmouth, United Kingdom, with animals provided for clinical classes by Peaceful Valley Donkey Sanctuary of San Angelo, Texas.
Attendees were inspired by lectures and clinics over the three day period by internationally recognized experts in donkey medicine, surgery, anesthesia, behavior and husbandry. Labs and training sessions with veterinarians and donkey enthusiasts from all over the world gave insight and enlightened others in a plan for “global efforts to improve the lives of animals who have carried so much of man's weight for so long.”
Classes included: Dental Demonstration (use of tools), Donkey Farrier, Donkey Driving, Collection and Freezing of Jack Semen, Sarcoids in Donkeys, Donkey Nutrition,  Field Surgery and others; 24 units of continuing education credits were also available. 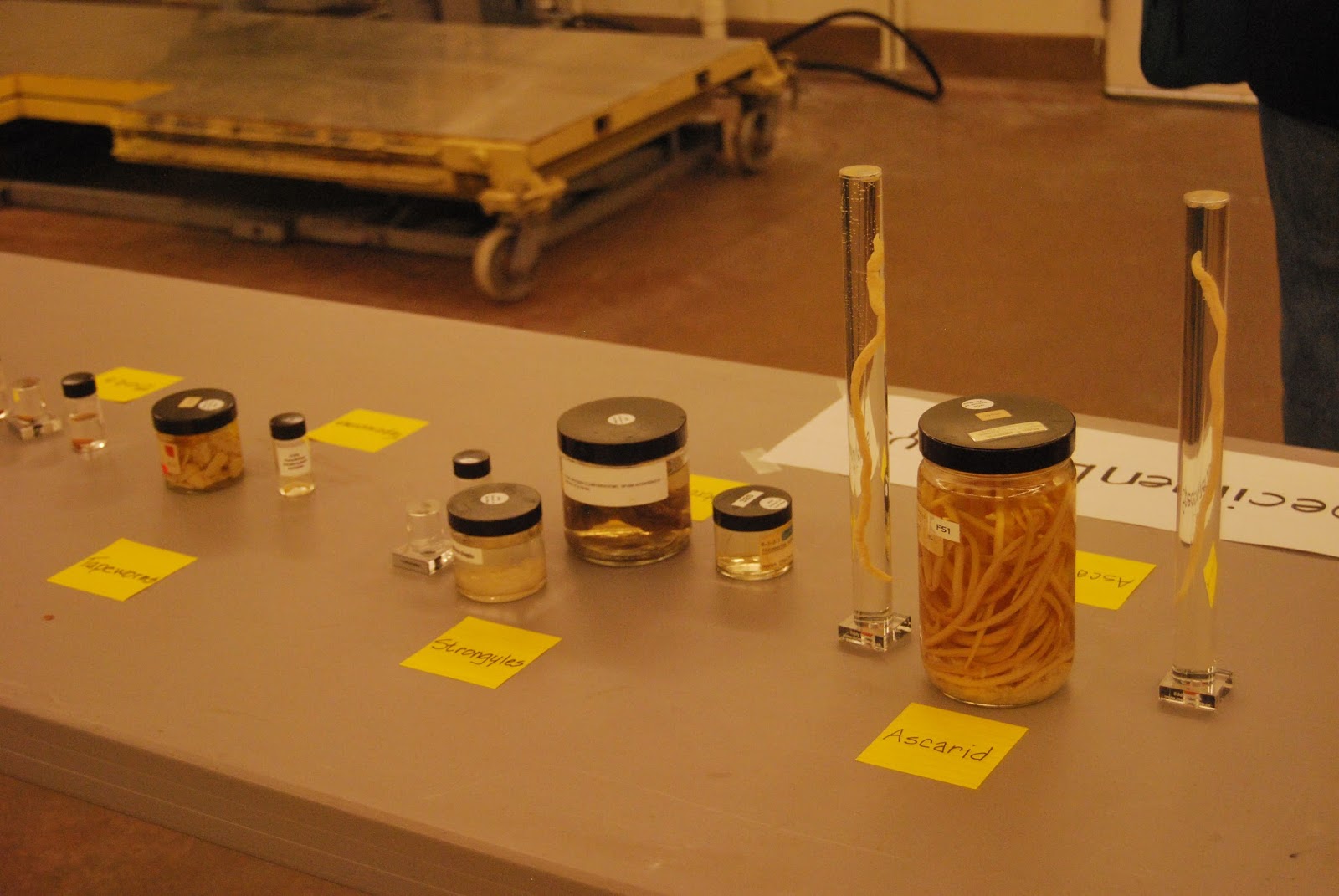 During my visit I was escorted to various clinical labs by Amy McLean PHD (and board member of the American Mule Association) and Eric Davis DVM (UC Davis alumni). My first stop was with Donkey Behaviorist Ben Hart who is one of the UK's leading equine trainers and the donkey care training manager for the Donkey Sanctuary. He worked with participants with a hands on approach using animals that were available for adoption. The Donkey Sanctuary was founded in 1969 by Dr. Elizabeth Svendsen, although enamored and intrigued by donkeys for some time, with a goal of rescuing them, she had little success until it was thrust upon her when she inherited 204 donkeys. Since then over 15,500 donkeys and mules have received lifelong care in the UK, Ireland and mainland Europe.
Amy McLean PhD plays a key role in an international initiative to improve the health, welfare and productivity of working equids. She is an assistant professor at North Carolina State University. Her main interest is donkeys and mules, having grown up on a farm in Madison, Georgia. She received her undergraduate and masters at the University of Georgia and her PhD from Michigan State. She has made numerous travels outside of the US to provide education to families that use working equids. She works with Equitarian Initiative, a group of veterinarians and caregivers promoting education and assistance in the developing world. It is estimated 100 Million working equids (horses, mules, or donkeys) are used primarily for family income, agriculture and transport. 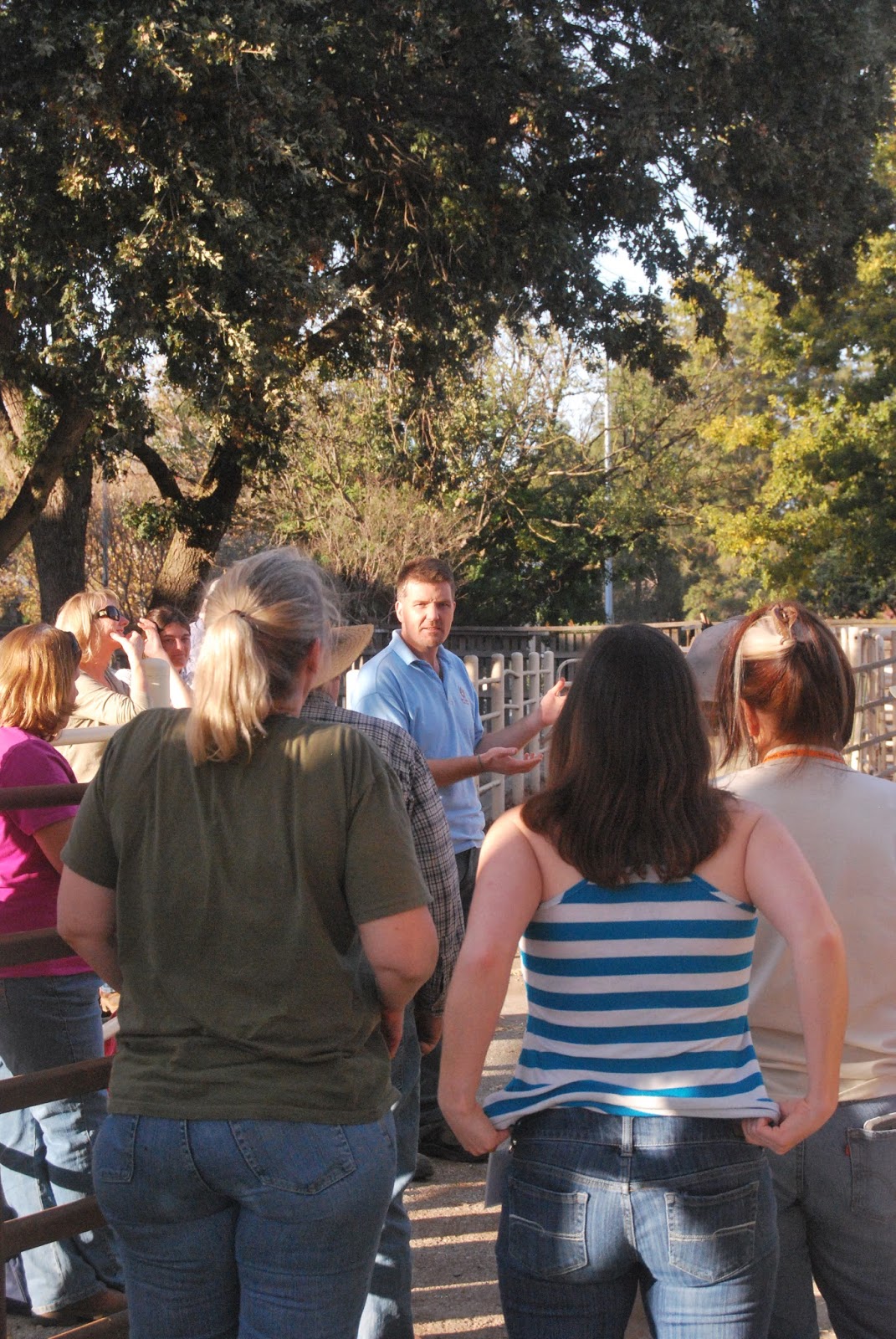 Eric Davis DVM is the recipient of UC Davis School of Veterinary Medicine Alumni Achievement Award for his contribution and leadership in animal welfare and student training in rural veterinary medicine. He is also a veterinarian with the International Animal Training Institute. UC Davis has been servicing the public since 1948 thorough teaching, research and public service programs in California with a faculty of 300 and a budget of $187 million. UC Davis is ranked second by US News and World Reports amongst North America's 28 vet schools. 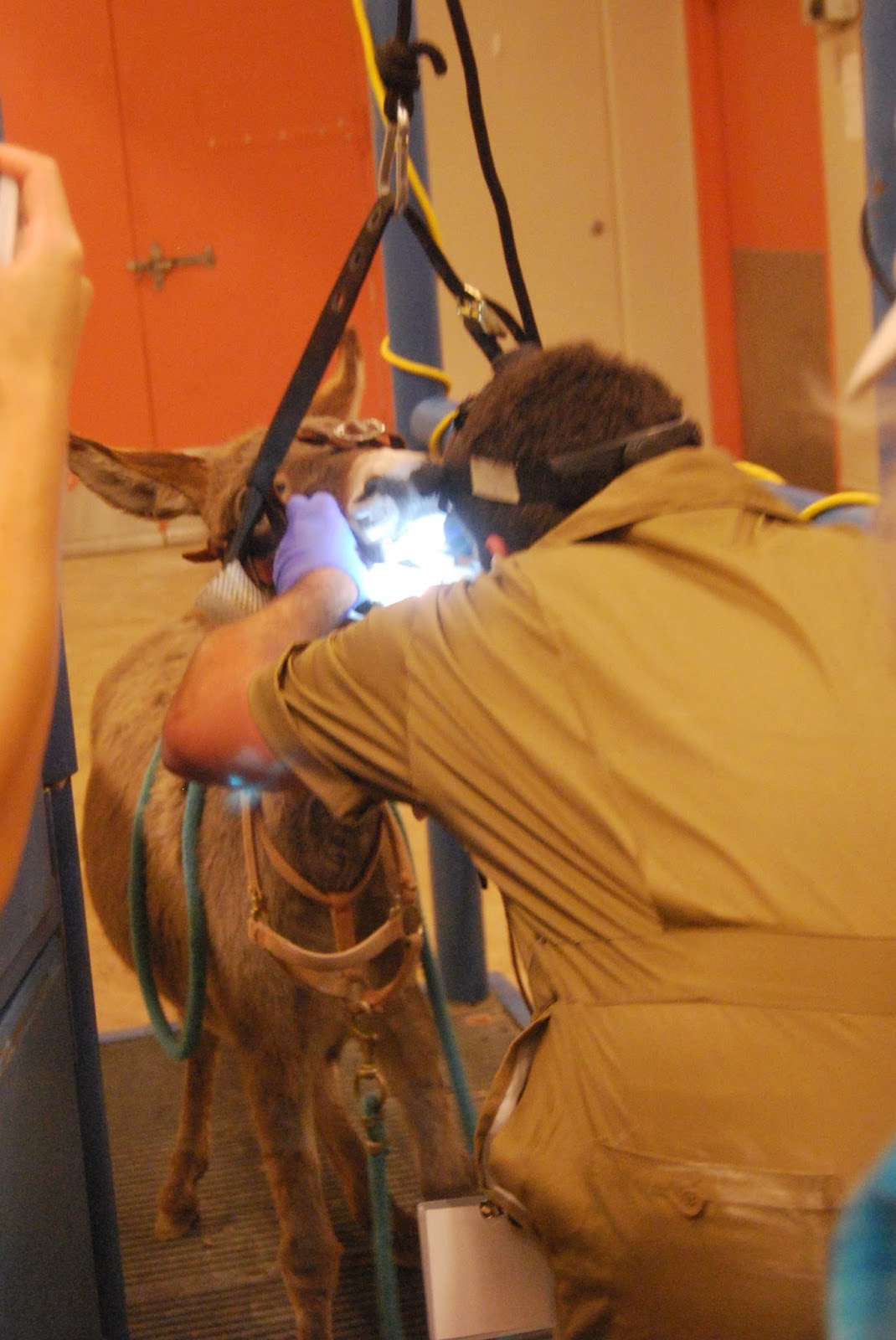 I also spent some time watching  Joao Rodrigues of Portugal provide an in-depth explanation of donkey dentistry. He started his university career in 2000 at the University of Tras-os-Montes e Alto Douro obtaining a degree in Veterinary Medicine in 2007, worked on studbooks of two endangered local breeds of donkeys and focused on donkey health and welfare. During that period he developed an interest in veterinary dentistry and in 2009 was awarded a four year PhD scholarship, developing research in the field of donkey dentistry. 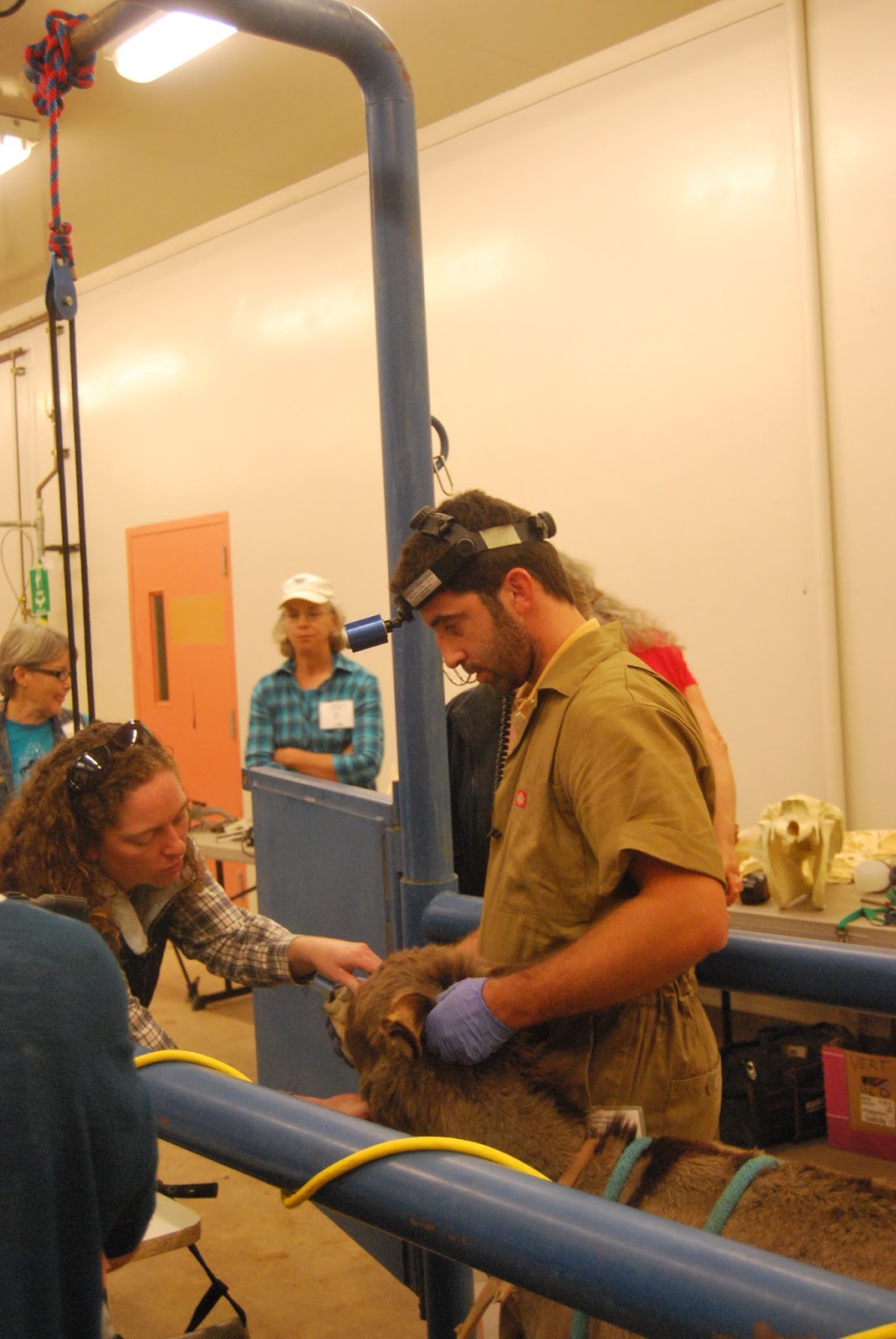 The clinic donkeys were provided by Peaceful Valley Donkey Sanctuary, run by Mark Myers, which for over 15 years has provided rescue and rehabilitation services to thousands of donkeys suffering from abuse, neglect, or abandonment throughout the US. Their main facility is located in San Angelo, Texas and works coast to coast and border to border.
This was a perfect example of groups with a common cause coming together, for the welfare of donkeys in a united front, in which everyone benefits.

The lectures and workshops from the 2014 Donkey Welfare Symposium are featured on a 12 DVD set available at donkeywelfaresymposium.homestead.com
The 2015 Donkey Welfare Symposium will be at Davis, Cali., November 6,7,and 8. A schedule should be posted by the end of the month.  Topics will include donkey reproduction and pregnancy diagnosis, training and donkey events, a discussion of how best to manage wild burros on public lands (including all the GOOD stuff that burros do for public lands), bio-security for sanctuaries, new science (on parasites, geriatric donkeys, and milking donkeys), mini's, harness and vehicle design....and a whole lot more!