Relentless rain during the Spring and continuing through the first couple weeks of July wreaked chaos with my mule. It also postponed a long awaited mule camp out to North Central Illinois' Sand Ridge State Forest.
The valley pasture at the ranch became a lake periodically during the Spring and early Summer as a result of continuous downpours.  The other pastures remained marsh-like creating the "perfect storm" for the incubation of biting insects.
Gnats, mosquitos, and flies ripped into Molly's lower front legs. They became raw.  The horses on the ranch were unaffected. 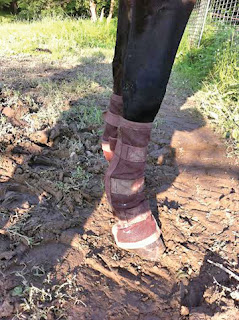 These fly boots really worked. Molly’s legs healed in no time at all. Kristy, the ranch manager/owner, takes the boots off when it rains because when they’re wet they have a tendency to chafe Molly’s legs

After trying various medicated powders and salves on her sores, I conferred with my vet.  Dr. Danah was confronted with this same problem on many of the donkeys and mules she treats. She couldn't explain why donkeys and mules are so vulnerable to insect attacks on their front legs while horses appeared unfazed. However she had a remedy: "Fly Boots."  I purchased a pair and in short order Molly's wounds healed.  She was now ready to go to Sand Ridge, that is, if the rain ever stopped. 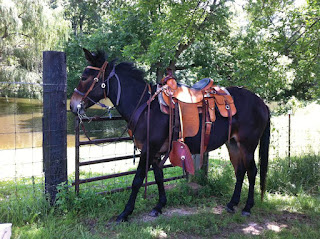 The valley pasture in the background flooded several times from May through the second week in July creating a perfect breeding ground for insects.  Also - notice Molly’s new Taps

The third week of July looked perfect and away we went. Sand Ridge State Forest has fascinated me for some time. Sand Ridge is Illinois' largest State Forest covering more than 7,500 acres of hickory, oak, pine, grasslands, open fields, sand prairies and wind sculptured 100 foot high sand dunes that are now timbered ridges. Hence the name, Sand Ridge State Forest! The Forest also has an archery and hand trap range for shot gunners.
The Forest boasts 49 miles of marked equestrian trails and 120 miles of rideable unmarked fire lanes. A muleman's dream!  But the most fascinating aspect of the Forest was it's infinite sand and it's intriguing variety of plants and animals associated with areas of the South Western United States.
The panorama of sand was deposited 15,000 years ago as the last glaciers receded from Mason County and the Illinois River Valley.  A subsequent prehistoric dry period invited species specific to arid regions.
My nephew intended to accompany me to Sand Ridge but circumstances prevented it.  Molly and I were traveling solo.  Approaching the Forest, I could see we were in an isolated part of Illinois that was dotted with many small communities and bumper tracks of agriculture. Many of the villages had colorful names. One community a few miles outside of the Forest was called "Goofy Ridge." I couldn't even find it on the map. It's been documented that the infamous Al Capone frequented this secluded town.
Closing in on the Forest the terrain changed from flat farm fields to beautifully timbered rolling mounds.  The Horseman's Camp was completely empty, we had the whole place to ourselves. Entering the campgrounds, I noticed that my cell phone's charger died. We were without communication.
All the campsites included a picnic table, hitch rails, picket line posts and fire pits. The center of the camp had a nice pavilion, a hand pump for drinking water, and pit toilets. Campers are invited to gather firewood from downed trees. Chain saws are welcome.
I located a nice shady campsite at the edge of the forest. As I took Molly Rose out of the trailer I soon realized we would of been eaten alive by mosquitoes if we stayed there. We then relocated to the center in a partially shaded location. I only wish I would have brought my picket line, there were numerous posts set up for picket lines.  It would have afforded me an even better camp site. The grounds were immaculate! There was an additional site for day riders.

Setting up camp was swift. However lugging a five gallon bucket of water for Molly and a seven gallon container for myself proved a challenge. It seems like things are getting heavier these days. The pump was at least 100 yards from camp.  The water out of the pump was odorless, clear and cold. Better than Ice Mountain.  I'll be looking for a light weight aluminum collapsible camping dolly or a wheeled water carrier before the next time out. 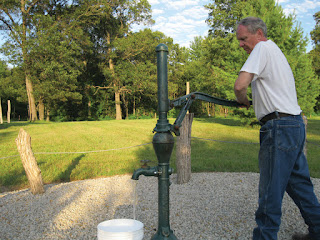 As night fell, the sky was illuminated by countless masses of stars. I fell asleep easily, thinking about the next day's ride.
At about 9:30 a.m. a white pickup truck was heading our way.  It had the State of Illinois DNR logo on the door.  It was the Forest's Site Superintendent, Billy Lowe.  He was about as friendly as one could be. 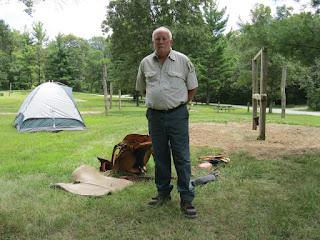 We had a great discussion about the area's unique geographical history, surrounding countryside, and the intriguing plants and animals that occupy the forest.
Bill possessed a wealth of information about the area and the Forest. "Be on the lookout for cactus, race runner lizards (these lizards are about eight inches long and can run extremely fast for short durations), ground hornet nests, and maybe a even a badger!  If you disturb a hornets ground nest with your mule, get away as fast as you can, they will only pursue you for a limited distance."  He also told me that flying squirrels are common here.  These squirrels are capable of gliding from tree to tree as far as 150 feet, usually in pursuit of insects. They don't actually fly, but glide, and for the most part are nocturnal. They live in hollowed out trees. 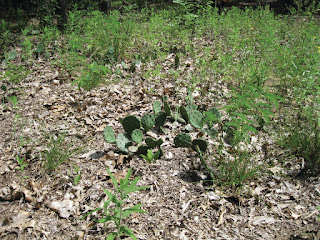 I commented how fresh and pure the water from the pump was. "Mason County sets on one of the purest aquifers in the nation, the Mahomet Aquifer. The sand in the forest is so porous that there are no creeks to cross, the water is immediately absorbed. Be aware that most cell phones don't work out here. Verizon usually gets a signal, but it can be iffy. So be careful, for the most part, your on your own."
Before saddling up, I ensured that my GPS was in working order and that my compass was on target.  I bid Billy farewell and informed him of the trail I'd be traveling in case I didn't return to camp by sunset.  Just before hitting the trail, Billy gave me a map of the Forest as well as several other interesting brochures. It was time to wrangle. 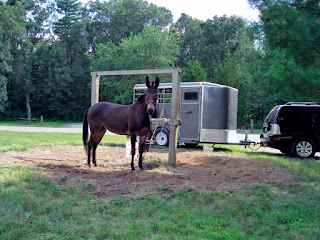 Molly was ever vigilant. Nothing could even get close without her sounding off

As we headed out, Molly had a lot of "pep in her step."  I took the Blue Trail, a 7.7 mile loop through the Forest.  I calculated that by taking this trail and occasionally veering off on some of the fire lanes, I would have four hours in the saddle. The trails were all soft sand, clearly marked and usually quite hilly.  I found myself singing an old Osborne Brother's tune "Up this hill and down, Up this hill again, It's a mighty, mighty long road, what ain't got no end..."
The views were pure unspoiled nature at it's very finest. Along the way I came across some of the cactus patches Billy talked about and even caught sight of a squirrel gliding from one tree to another. As soon as the squirrel landed on his destination tree, he immediately scampered to the back side of the tree seeking cover.
For about a two mile stretch, the Forest was so thick, my GPS was unable to pick up a satellite signal.
I finished in almost exactly four hours as planned. Molly rode like a gold medalist, never making a mistake and intently obeying my cues.
During our ride we never encountered another soul. Not a hiker, birder, or other rider.  It was kinda neat.
Just before dusk a Mason County Sheriff's Deputy drove into camp and bee-lined his cruiser at my campsite.  Stopping abruptly, the first words out of his mouth were, "Are you Joe?"  Well, my wife sent out the posse thinking I was either lost or injured somewhere out on the trail.  I couldn't call home and she thought the worst. God bless her.
We stayed the night and broke camp the following morning. Sand Ridge State Forest is truly an Illinois gemstone, and a mule riders delight. 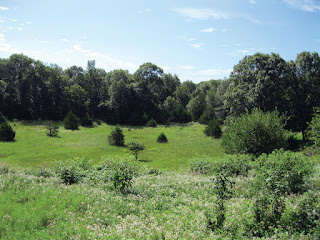 One of the many picturesque meadows 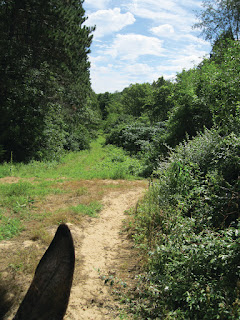 Notice the fire lane off the trail 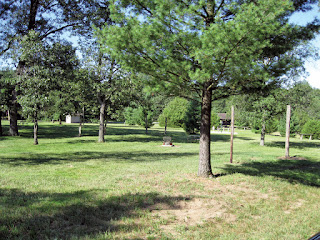 The Horse Camp was laid out thoughtfully. Both hitching rails and picket line posts were available. The pavilion would sure come in handy in the event of a rainy day or group outings
Posted by cab1770 at 11:14 AM