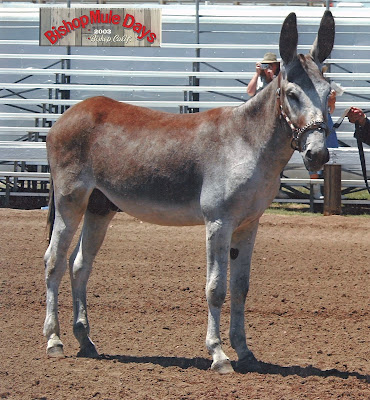 March 27, 2013 started out like any other day, until I opened the living room drapes.

Outside stood my jack, Bar JF Sterling Silver (Jackie).  He was standing in his normal place near the feeder but his lips were parted and he looked like a statue rather than a live animal.  I grabbed the banamine and cell phone and ran outside to his pasture.  When I gave him the banamine there was no reaction.  I called my vets office (Dr. Troy Ford) and told them I was on my way with Jackie and he was very sick.  He was in so much pain, I don't know how he stepped up into the trailer, but he had so much heart and would do anything I asked of him. When I got to Troy's they went to work on him fast and furiously.  I never would have thought this day would end in such heartache.  I thought I would take him to the vet, leave him a couple of days to be treated for whatever his ailments were and then bring him home where life would resume a normal routine. The longer they worked on him the more it appeared that he wasn't going to make it.  Troy did an ultrasound and found a rupture in Jackie's small intestine. Surgery was an option but Troy gave Jackie only a 10 percent chance of survival and recovery.  Had the odds been better and his suffering less, I would have sold the farm to save this guy.  He not only was a wonderful jack, producing some exceptional foals, but he was so dear to me and held a special place in my heart.

The difficult decision was made to end his suffering.  Troy's wife, Mardee, and his assistants helped me coax Jackie out to a pretty green patch of grass where we would ultimately lay him down.  The finality of what was happening overwhelmed me and the floodgates opened.  As the girls and I cried, my attempt to cope and try to lighten the mood was to kiddingly comment, "It's a shame we couldn't collect him one more time."  At that moment everything stopped.   Troy made a fast call to Dar Hanson, the Reproduction Manager at the Ward Ranch in Kingsburg.  The decision was made to harvest his testicles and retrieve the remaining semen after he was put down.  Troy performed the procedure, packaged everything and through my tears I drove the 30 miles to deliver everything to Dar who would then extract the semen.  While I went home and cried for Jackie, Dar processed the semen. Later that evening Dar called and gave me the hopeful news....the semen appeared viable. There was a chance that Jackie might live on!

This was new territory we were charting and felt the odds may be against us.  The stress to the semen from postmortem harvesting, temperature changes including freezing, transport and so many other variables could be working against us to decrease the viability of the semen. To increase the odds of success, I took only my best mares to be inseminated, those who have successfully foaled several Jackie babies.  If the mares did not settle in foal that would give us an indication the semen may not be viable.

To play it safe we used four straws of semen per mare.  Ultimately, when I took the mares to be preg-checked, Troy, Dar and I were excited to learn that all mares had settled in foal. We felt we had cleared an impossible hurtle. Because of that success and Troy's re-analysis of the semen, he believes this season we can cut the number of straws to two per mare, with the result being that we may have enough semen to cover over 40 mares!

Now let me tell you about my Jackie. When I made the decision to start my own breeding program, it didn’t take long to find the jack I felt would cross well with my AQHA and APHA registered mares to produce quality mules.  Jackie’s lineage was well established, having produced racing champions such as "Bar JF Hot Ticket," and "Bar JF Red Ticket" and champion show mules. 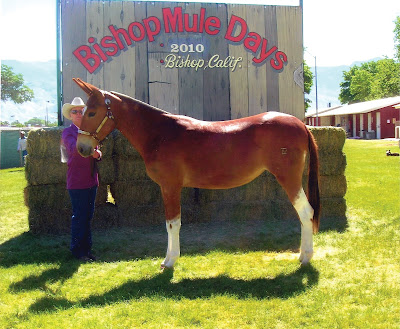 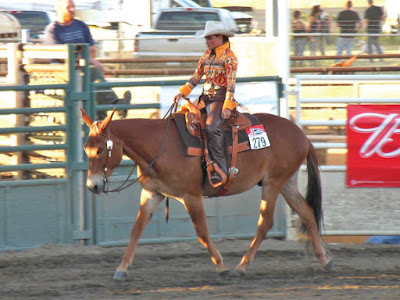 Call Me The Fireman owned and ridden by Kellie Shields

Jackie himself has produced mules that are very successful in their own right. In the show arena his son Call Me The Fireman has won numerous Bishop World and Reserve Championship titles, and the year end 2012 American Mule Association All Around Champion Mule.  A daughter Roman IV's Ima Big Star as a two year old, in 2010, won both her halter classes at Bishop Mule Days.  Star is now competing and excelling against horses in Cowboy Dressage. She was also used to demonstrate Cowboy Dressage at the Horse Expo in Pomona. Jackie's foals are being used in all types of equine activities including, driving, packing, pleasure, trail and the show arena. The biggest source of pride I have in Jackie is hearing from owners of his babies of the trainability, intelligence and overall kind and willing disposition of his foals.

I have been in contact with many people in the mule and donkey industry and various veterinarians trying to ascertain if anyone had knowledge of other postmortem harvested semen from a donkey.  I learned this has been accomplished in the horse industry but was not able to find any history of this procedure being performed on a donkey.

The most important thing to keep in mind if ever faced with the tragic loss of your jack, all may not be lost.  Depending on circumstances, if there’s any hope of successfully harvesting your jack’s semen postmortem, keep in mind the procedure is time sensitive. In Jackie’s case, we harvested the semen in a matter of minutes after he had been euthanized and before his body temperature dropped.

Jackie's death has brought together many people, those who I would not have expected to be concerned with continuing a donkey's line. It was the open and forward thinking of two men that made this project a reality.  There are no words to express my appreciation and gratitude to Dr. Troy Ford and Dar Hanson.  Because of the success of this project (adventure) we will be expanding our breeding program and accepting a few outside mares.

Until I owned Jackie, I didn’t understand why mules did some of the things they do.  I always wondered, “Why do they do that?”  Jackie gave me all those answers.  There isn’t a day that goes by, I don’t miss him.  Jackie was my alarm clock, my watchdog and my friend. He will  be in my heart forever. 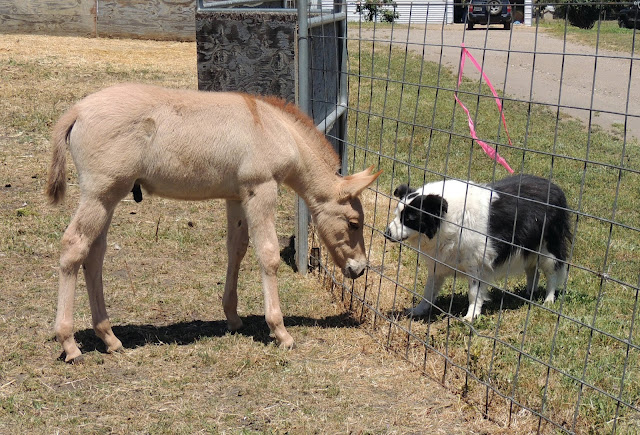 “Here's the first mule born using the post-mortem harvested semen.,” said KATHY. “His name may end up being Dar Ford IV.  I know it doesn't sound very cool, but without these two wonderful men this whole thing would have never happened.  His barn name is Moon as he was born the night of the eclipse.” 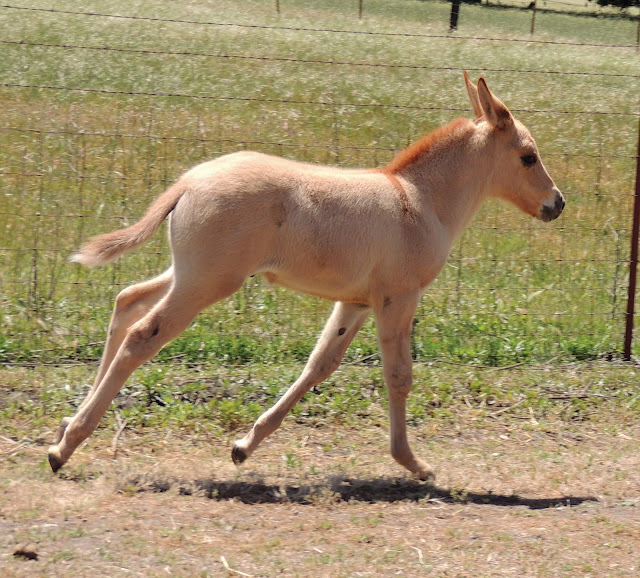