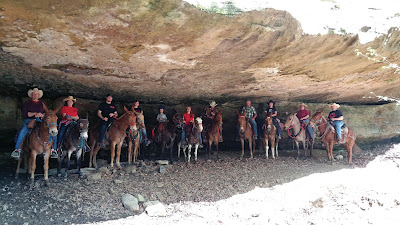 A group of mule riders Angie guided to Whiskey Cave

Recently, I had the pleasure of helping organize the largest gathering of saddle mules east of the Mississippi, if not anywhere, and we’re still telling stories and sifting through pictures of an amazing week at McAllister and Friends’ Shawnee Mule Ride in southern Illinois. From April 15-24, more than 300 mules and riders from 24 states, plus New Zealand, Canada, and Switzerland, visited High Knob Campground to trail ride and explore the 280,000 acres of Shawnee National Forest. Some stayed a few days and some stayed the entire event, but all left as friends for life and admirers of our scenic piece of paradise here in the Midwest. 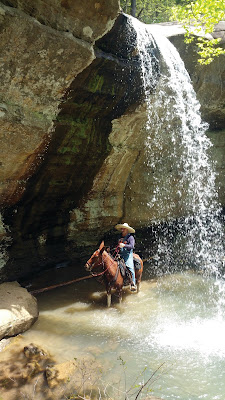 Anthony “Bull” and Cathy McAllister, of Rinard, Ill., who have been camping and riding at High Knob and Shawnee since 1983, and JoJo Moomey, owner of High Knob since 2009, were the forces behind the event, working tirelessly to plan, prepare the 50-acre camp, advertise, and ensure everyone enjoyed their visit. I don’t think these dedicated hosts ever slept. In the early morning, they could be found drinking coffee with campers, answering questions, going over maps, setting out lists of the organized rides that day, or loaning out mules. Late at night, the McAllisters were visiting around the campfire, while JoJo was usually still checking in campers and making sure everyone had what they needed. With more than 150 sites, 80 covered stalls, water, electric, a weekend cook shack, a laundry area, hay, tack supplies, and free coffee, she usually had it covered. Mary Rathbun, Allardt, Tenn., and Ruth Reynolds, Tennessee, took t-shirt orders for the event, and Ival McDermott, New Jersey, even donated commemorative coffee mugs. Mule riders are the best! 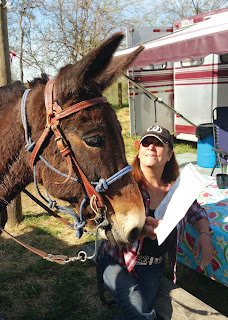 Some other highlights of the mule ride were a tack swap, vendors, including Linda Brown with the Mule Store out of Pennsylvania, Crestridge, Crooked Creek, and Rockin’ R Saddleries, Beth Newmaster, of Boonville, Ind., from Mule Girls, and local Amish shops. Plus there were hog roasts and dances on both Saturday nights. Kathy Lawless of Michigan donated one hog, while Roy and Beth Landers, Illinois, donated the other. Joe Hamp was the cook, and Jackie Lueking donated the tableware. Everyone brought a covered dish, and there was food for an army – and an army of mule riders showed up, with 320 served the first Saturday. The only drama of the week was when the McAllister’s granddaughters, Jesselynn, age 3, and Scarlett, age 2, fought over who was going to dance with Tucker Mayfield (my 6-year-old  son). Scarlett wasn’t interested in sharing her man. Still, they danced all evening, and Tucker was even the opening act for the Johnny Williams and the Steelherders band, playing Cripple Creek and Twinkle, Twinkle Little Star on his banjo. 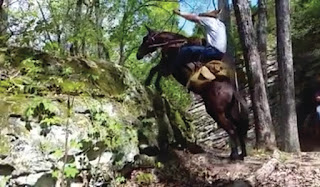 Bill Meyer of Tennessee jumps off a rock at Shawnee. His mule, Waylon, won second place for Best Trail Mule at the Shawnee Mule Ride

Although anyone with a mule already owns a trophy and all of the mules were awesome (not one mule bucked anyone off all week), several awards were given at the event. The farthest traveled was Stan Mullen from New Zealand, Katja Frohlich from Switzerland, and Chris and Sarah Hostletter from New Mexico (who drove 1,400 miles). The oldest mules belonged to Dawn Frank of Ohio (Sally, age 24) and Diane Steward of Harrington, Del., (with a 21-year-old mule). The oldest mule rider was Rodney Ellis, 78, of Iowa. The orneriest mule went to Anthony McAllister. Youngest riders (who rode their own mule) were my son Tucker, 6; Taleya McVey, Illinois, 12; Hunter Lawburgh, 12, Indiana;  and Bristol McAllister, 13, of Illinois. The Prettiest Mule trophies were awarded to Cindy Hanson and Fred, of Croswell, Mich., first place; a tie for second with Beth Greenville and Ladybug, of Kentucky, and Tammy Bradley and Ophelia, of Brooksville, Fla.; and a tie for third with Brock Milam and 4 Socks and Sunny from Benton, Mo., and Wendy Griffith and Kate, of Kansas. Finally, the Best Trail Mule award went to Ellen Carmack of Glasgow, MO and her mule, Dish. Second place was Bill Meyer of Tennessee and Waylon. Third place was Charlie Hays of New York. 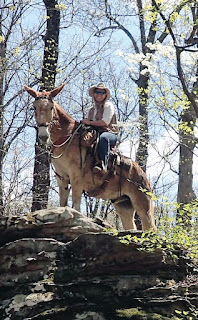 Of course, even with all of the fun activities, the best part of the week was meeting new mule people, including Mule Girls I’d talked to for years on Facebook, but never met in person, and also seeing the excitement of first-time visitors after experiencing the phenomenal trail riding at Shawnee. Florence Brimstein of Chillicothe, Ohio, described Shawnee as “Hocking Hills on steroids.” Although some riders explored the trails on their own, others took advantage of the many organized rides scheduled each day for various landmarks, such as Garden of the Gods, Hurricane Bluffs and Initial Tree, Rice Hollow and Whiskey Cave, Dead Man’s Canyon, and others. Guides included myself, the McAllisters, Kathy Lawless, Rich Cooper, Tony Lusch, Ross Bird, Bill Meyer, and Wayne Moore. On the last Saturday, many of us left camp early to venture over to the western side of Shawnee to the Jackson Falls area. Rodney Ellis, who has trail ridden in some of the most remote and beautiful areas out West said that his Shawnee experience was “the ride of his lifetime.” 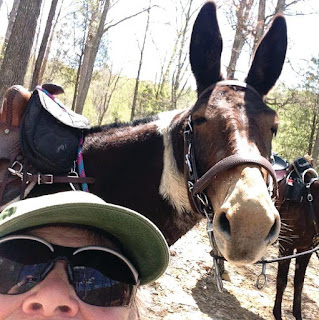 Ival McDermott of New Jersey and Caroline take a selfie 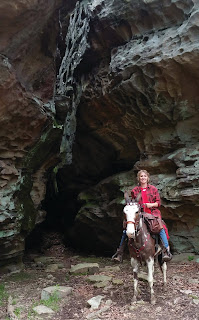 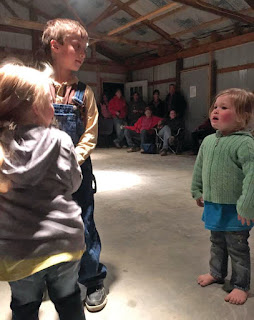 Anthony MCAllister's grand-daughters, Jesselynn and Scarlett, fighting over Tucker at the dance. Scarlett was not at all happy about sharing her man with her sister