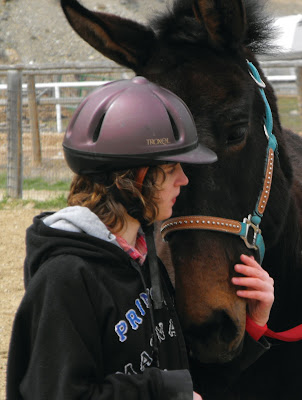 Stephanie proved to Ginger that, despite her physical size and strength, she was a strong, dependable leader that would follow through and not pussyfoot around about her intentions.  They have a relationship built on mutual respect

Physical strength isn’t everything, especially when dealing with mules. Some folks still believe that to handle a mule you need brute strength, bigger bits and chains on the halter. But that theory doesn’t apply to all mules, though granted, there are those that may need some stronger input. Often, one of the most basic things folks overlook when handling equines in general is attitude and follow through.
Stephanie Middlebrook is one of my riders. She just turned 28, has cerebral palsy and might weigh a hundred pounds dripping wet. She’s been active with horses since she was five and believe me, this live wire doesn’t take any guff of any of our equines. She doesn’t have the physical strength, but she sure has the attitude of a lead mare, and the equines know and respect her. Though she is non-verbal and just communicates through sounds, Stephanie gets her message across. They also know she will follow through on any corrective action she might have to use.

Stephanie’s first mule encounter was with John, an older john mule that has now passed on. She rode him a bit and did lots of in-hand trail with him. Since they were doing so well together, we thought it might be fun for Stephanie to do an in-hand demonstration at the Salmon Select Mule Sale. So she was going to step up to Ginger, my show mule who’s an opinionated, aged molly. For me, Ginger has always been solid and does what she’s asked. So I thought she would be a good match for Stephanie. Ginger thought she was going to have other ideas.

We were in the trail area where Stephanie was going to lunge Ginger for the first time in the open. Stephanie had lunged her a little in the barn and that went alright. The open area proved to be a different story. Since things went well in the barn, I didn’t hesitate having Stephanie try in the open since the demonstration would be in a big arena. Stephanie held the lungeline and whip and I held the line about six feet behind her, basically to keep it from tangling around her. Stephanie always knows that if anything happens, she’s just to drop the line. Well, Stephanie sent Ginger out on the line and started her going around to the left. Suddenly Ginger snatched the lead and took off across the field, surprising both Stephanie and I. We both let go of the lungeline.  I hiked out, got Ginger and brought her back. Stephanie sent her out again and at the same spot, Ginger snatched the lungeline and was off again. She had never done anything like this before.

I gathered her up again and Stephanie and I reviewed our strategy. Once was a fluke, twice was planned so we had to be ready for her. I told Stephanie to send her out again and at the spot she took off, to snatch the lungeline as hard as she could and yell “WA,” her sound for whoa. Stephanie sent her out again and at the same spot, we could see Ginger’s nose tip outward. That instant Stephanie pulled on the lungeline with all her might and as Ginger’s nose came inward she yelled “WA” at the top of her lungs! Ginger hit the brakes, her eyes grew big as saucers and she looked at Stephanie. I was trying hard not to laugh at Ginger’s expression.  Stephanie puffed up to her lead mare attitude, looked at Ginger and motioned her to come to her. Ginger did exactly as she was told. Walked up next to Stephanie and stood like a perfect lady.

Stephanie sent her out on the lungeline again and as Ginger neared her escape spot, Stephanie shook the line, gave a verbal reminder and Ginger politely continued around the circle. Ginger got the message! It didn’t take brute strength, just attitude and timing. Stephanie proved to Ginger that, despite her physical size and strength, she was a strong, dependable leader that would follow through and not pussyfoot around about her intentions. Before long they were working various in-hand obstacles including very tight back throughs and bridges. And, for their demonstration, Stephanie worked Ginger on the lungeline, changed directions and even sent her over a small jump.

Last fall, Stephanie started working with Bonnie, first in the barn doing in-hand work and some obstacles. She’s been on Bonnie twice and this spring hopefully she will be riding her more often. This is a challenge for both of them. Because of Stephanie’s physical condition, she sits differently in the saddle, her leg cues are different and she uses her reins differently than we do.  Bonnie isn’t quite sure what’s expected of her and is having to learn a new set of rider cues as well as to understand Stephanie’s vocal language. And, Stephanie will have to figure out how to communicate her intentions to Bonnie.

Watching Stephanie working with the equines often reinforces the fact that they are comfortable and respond well to a confident leader. It’s not a person’s size or physical strength, but their heart and attitude that make the best training tools. 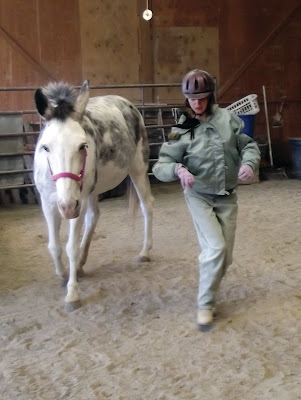 Walk with me! Bonnie confidentially walks with Stephanie off lead 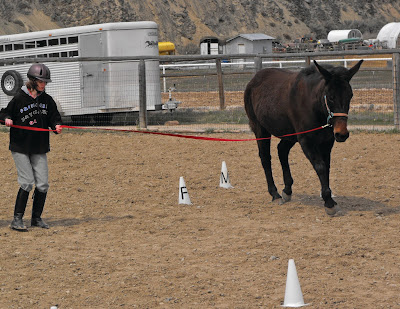 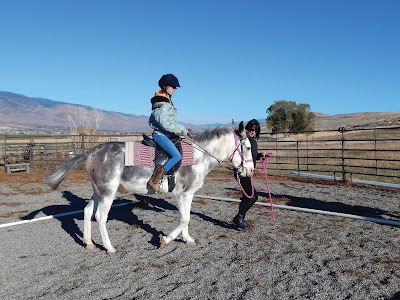 Susan Dudasik is an equine journalist, PATH Intl. Certified riding instructor and a mule enthusiast. She's competed in numerous trail class events, holds clinics and teaches groundwork and trail classes at Misfit Farm in Salmon, Idaho. The advice given here is meant only as a guide. A professional trainer should handle any serious equine training problems.
Posted by cab1770 at 11:52 AM