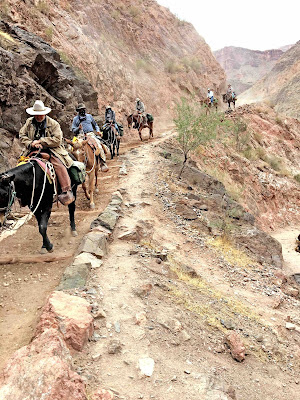 by Anna Arnold, Romoland, Calif.
photos courtesy of Kelley Jo Locke
November was a very busy one for me…not that I can’t find anything to do, I am always ready for a call saying let’s go, or do something. I get my neighbor, Maggie to feed the animals and take my dog to my daughters. I don’t have to pack, as I usually have it ready to go; grab a coat and let’s go…and that is just what I did.
I had gone to lunch with a client and friend of my daughter’s and mine, Jeanette Batton. She was talking about going to the Indian National Finals Rodeo in Las Vegas, NV in a few days and mentioned her friend was unable to go and would either of us like to go with her. She had tickets and rooms at South Point where the rodeo would be held. Well, yes, of course I wanted to go. So plans were made, and after a few stops to pick up some adult beverages and snacks, we were on our way. Jeanette is great to travel with, as she is an ex-highway patrol gal and knows her ins and outs on the highway. We arrived and went to watch the show; this was a wonderful rodeo, with members of many tribes from the U.S. and Canada competing in all the regular events.
Along with the rodeo there was a trade show. Many tribes brought authentic rugs, clothing and jewelry for sale. I had gotten an old Choctaw necklace years ago and was told it had been made by an Indian woman in Oklahoma. Well, being part Choctaw, I bought it. Now I brought it with me and asked some of the beaders to take a look at it. They were so careful with it and said, “Yes, it was old and very well made, you must be very proud of it.” And believe me, I am. I had to buy a beautiful little string of beads to go with it. So, now I will be wearing my beads, along with my pretties Danny has given me. I am a lucky lady.
After the rodeo we returned home. I then began to get pictures and stories from Danny Locke, Firebaugh, Calif. and his daughter Kelley Jo Locke of Fresno, CA. They planned a ride down the Grand Canyon some time ago and had asked me to go along. Well, I only have a four hour butt and knew I couldn’t make the six plus hour jarring ride down the canyon, sleep and ride out the next day. So, I wished them well and asked them to send me pictures. The following is my conversation with Kelley Jo:

How did you decide to go on this trip?
Dad’s 80th birthday was coming up and I was trying to think of a gift for him. I thought of the Grand Canyon, as I never know when they will stop allowing mules to go down, and we could never make it down and back on our own two legs! I wanted his 80th year to be something special, and this trip was!

How long in advance did you have to make plans? 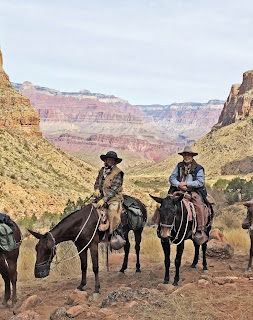 I called last November 1, one year in advance. I wanted to go in the spring, but you had to call on the first of the month that you wanted to go, so I missed that opportunity.

Was there a weight limit for riders? 200 pounds.

How long was the ride down and back?
I took five to six hour, depending on the group you were with, and how many stops they needed, i.e., dropping things on the trail, taking coats off or on, and so on. There are a couple of bathroom breaks, but none of us needed them, other than the lunch break at Indian Gardens, half way down.

Where did you sleep?
The night before the trip, we slept in the Thunderbird Lodge, then we slept in a cabin in the Canyon at Phantom Ranch, the following night we stayed at the Maswik Lodge.

What did you do for meals?
We had very little on the way there; Dad was trying to make the 200 pound weight limit, and he had several pounds to go! We had grilled veggies and fruit and yogurt. On the mule ride they supplied a box lunch, turkey sandwich, fruit and trail mix. Once at Phantom Ranch, they cooked us a great family-style steak dinner. After the ride, we ate at El Tovar, a fantastic restaurant. 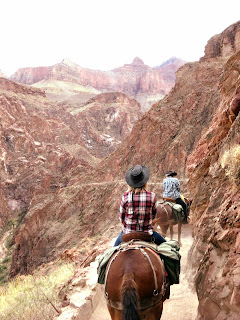 How did you decide what mule you were going to ride?
Our mules were assigned to us. When the mules were brought in, they kept yelling at one mule, Cuco, so it was Cuco this and Cuco that! I was thinking, I don’t want Cuco, but guess who I got! She ended up being perfect for me. Dad got Bert.

Why did you have to face the drop-off side?
As most people know, mules have great survival instincts. If spooked, they will not jump off the cliff. It also allowed the hikers to walk behind us. If they faced the wall and spooked, they could take a deadly step back, or they could kick a passerby and knock them off the trail.

What was your experience like?
Exciting, terrifying and humbling. Oh, and exhausting! But worth it…definitely a trip of a lifetime.

Would you do it again?
Dad can’t wait to go again. I am happy with my experience and would like to take the rim ride next time. I would like to spend more time at the top. I didn’t get to see everything.

What about the other people on the ride?
Well, they were all great sports, even though they were first timers on mules. We made long time friendships with two ladies from Australia.
On the way home Danny and Kelley Jo took a side trip to Boron in the Mojave Desert. The mine is still in operation and I’ve written about the mine’s history and the mule teams there in other articles. There is a nice museum to visit if you’re even in the area. 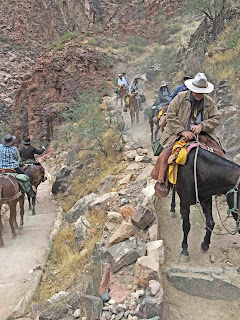 When they returned home, Danny had to get his mule ready for the ranch sorting and trail trials being held at the Slender Ranch in Sanger, Calif. I told him I would meet him there, and was once again on the road. I drove six hours to the Slender Ranch. I got there a little early and Tucker was going out to chase cattle, so I rode along. And guess who I rode? Yep, the famous Donk-a-Lena, Hall of Fame Champion. We rode around their beautiful place after I got the OK from Mary Lou to ride her mule. Like me, she is very picky about who rides their mules! Thank you for such a sweet ride. Tucker did some trick riding on his famous race mule, ShuFly, but nothing was hurt and we went on.
The event was well attended. Some of our mule buddies showed up…Jason Smith and family, along with Jennifer Jones-Lauzon and daughter, Payton. Mary Lou also lets Payton ride her mule, and she rode her in several events. Later, Payton took her saddle off and was playing games with other youngsters.
By this point, Danny was a pretty tired man; I would be too. Riding the Grand Canyon, and then the sorting and trail event takes a toll. The Slender family invited us to the house for supper and a little get together before the show. Danny had team roped in his younger years, and all kinds of stories were told.
We stayed over until Sunday, as the show was late getting over and the morning fog was heavy. Danny went back to Firebaugh, and I traveled to Winchester. Now it’s Thanksgiving and we were both about traveled out, so we stayed home and enjoyed our families. 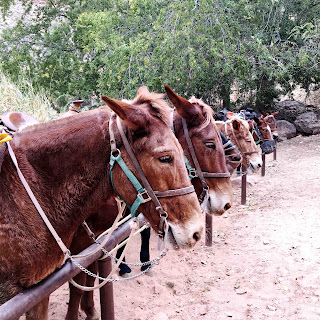 Another hit over the holidays was that of my handyman, Scott Johnston who suffered a stroke Thanksgiving Day. Thanks to his son’s fast recognition of what was happening, he got Scott to the hospital quickly, and it was caught in time. He is home now recovering. I sure do miss his company and help.
Speaking of recovering, our friend Sandy Powell, a photographer in our area, was injured in a wagon accident earlier this year. She was thrown out of a wagon, run over and dragged quite a ways.  Somehow, through all of this, she’s kept a great sense of humor. After the wreck Sandy was strapped to a backboard for hours and had a huge pain in her tush the entire time. The ambulance ride took hours, then the emergency room visit took even longer. After seven to eight hours, when she was finally able to get up and move a bit, a huge rock came out from underneath her; the rest of the gravel in her pants came out also. What a relief for her! 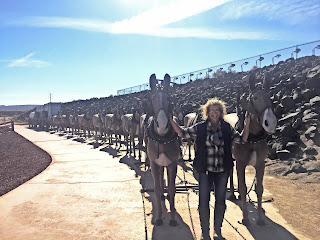 Our good friend, Porch Pig Patty Rustin Christen is having some of her own problems with her dad, Harry Kim. He’s been laid up after surgery and then Patty had to put down her trusty sidekick, Hank while she was taking care of her dad. My gosh, these girls are tough.
Lots of good rides are coming up out our way. March brings up the Palm Springs Guest Ride the last weekend in March, then the wonderful desert ride at the Boyd Ranch, out of Wickenburg, Ariz, Mule Madness is the middle of March, and their ad is in this month’s Mules and More. And somewhere along the way will be an 80th birthday ride for an ole mule lady.
I want to wish all you readers and mule lovers a wonderful New Year. God got us through 2017 with a lot of ups and downs. Make the best of each day, and remember to be kind and tell your loved ones how you feel. Time slips by quickly!


Look for me on the trail or at a mule gathering. I’m the Granny wearing a big hat, cool boots and riding a fine mule.
Posted by cab1770 at 11:18 AM