One Step At a Time, All Day, Every Day

“A nomad is a person with no settled home, who moves from place to place as a way of obtaining food, finding pasture for livestock, or otherwise making a living. The word nomad comes from a Greek word that means one who wanders for pasture. Most nomadic groups follow a fixed annual or seasonal pattern of movements and settlements. Nomadic peoples traditionally travel by animal or canoe or on foot. Most nomads live in tents or other portable shelters. The nomadic way of life has become increasingly rare. Many governments dislike nomads because it is difficult to control their movement and to obtain taxes from them. Many countries have converted pastures into cropland and forced nomadic peoples into permanent settlements.”1

John Sears and his three mules have a message for city mayors and other politicians: The natural world is in a crisis, and our society needs to slow down so that people can reconnect with nature. In order to do that, we need more trails across this country, for people to walk, bike or ride their mules. He is bringing his three-mule pack train to cities and towns across California to bring public awareness to the destruction of the natural world, and gather support for a national trail system connecting all 48 states.

Sears has been exploring and traveling throughout the Western United States with mules for over 30 years—without using a vehicle or a horse trailer— roaming from Wyoming to Mexico, from Arkansas to California. For the last 12 of those years, he has been on the trail/road continuously, living, sleeping and cooking out of doors year-round in all kind of weather. All of his worldly possessions fit into four pannier boxes and two top loads.

He has probably covered more miles on foot and astride, and seen more of this country’s wilderness than almost anyone alive today. And from his vantage point in the saddle over three decades, Sears has also seen a lot of alarming changes. The rate and scale of that change is what has now inspired him to take action. 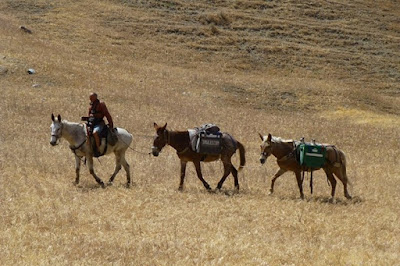 “Time after time,” says Sears, “I’d come back to a beautiful place I’d camped at for years and it would be gone.  I’d see all the trees cut down, or big gashes in the mountains; ridgelines covered with windmills, new housing tracts and freeways; creeks and rivers dammed or disappeared. First I’d get really sad and depressed. Then I’d get angry. Finally I got to the point where I just couldn’t stand it anymore, and I had to do something, anything, to fight back.”

Fighting back, for Sears, meant turning away from the wilderness he loves, and riding instead into the heart of the urban jungle. For the last year, he’s been free-ranging across California, riding from city to city with the mules, focusing public attention on the rapidly vanishing natural world and calling on elected officials to support a nation-wide, interstate trail system as a means of balancing the environmental scales. He has distilled his thoughts into a “Declaration of Emergency” which he delivers to elected officials in every town he passes through. The man who has crossed the Grand Canyon four times, ridden the entire length of the Pacific Crest Trail, and camped under the stars in nearly every National Forest and National Park west of the Mississippi, now pitches his bedroll and pickets his mules in vacant lots and neighborhood parks, in hopes of saving the wild places he loves.

He admits it’s a David and Goliath struggle, but he feels obligated to raise his voice in defense of the wildlife, rivers and mountains that are getting crowded out by what he calls the Megatropolis. “What else can one little man do?” he asks. “It’s not much, but it’s what I can do. And who knows where it will go? David started by throwing one little pebble at the Giant, and look what happened. But I’m not an activist. I’ve never done anything like this. Of all the things I ever dreamed of or thought about doing in my life, I never, ever imagined I would be doing this. But I just felt called to action.”
In California over the last year, Sears has been arrested for trespassing, ticketed for possessing “animals at large,” and had his mules impounded by Animal Control. He’s been sued by the National Park Service, sprayed by crop dusters and hazed by motorcycles. In April, the Halliburton Corporation filed criminal trespass charges when he stopped to rest for the night and graze the mules outside of Bakersfield on a vacant lot. Almost every night he gets rousted by law enforcement and told to move along. But still he persists. Each citation galvanizes his resolve and underscores the reason for his journey. “They are criminalizing the act of being outdoors,” he says. “People have the right to be free, they have the freedom to walk on public land, and rest when they are tired. But we are losing that right.”

But he’s also aided and abetted regularly by some of the more than 31,000 Facebook followers who read his blog on 3Mules.com and chart his daily GPS coordinates on his Mule Tracker page. When word goes out that he needs equipment, strangers have ridden their bicycles to obscure locations to deliver horseshoes, driven 100 miles to replace a broken pack saddle, or dropped off bales of hay. They’ve provided pro-bono legal services. When his mule of 14 years, Pepper, went lame and had to retire, a woman in Norco showed up with a replacement mule for him—the one-eyed Palomino john he calls HooDeeDo. 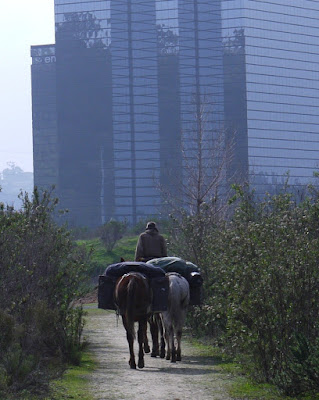 “It’s not me, it’s the mules,” explains Sears. “I could be anybody doing this, but the mules just captivate people. They’ll be grazing along the sidewalk, and people will come out of their houses to see them, and pretty soon there’s a whole crowd. Little kids are all over them like puppies.
Neighbors who have never even met each other are talking to each other for the first time. It’s the magic of the mules. I see it every day.”

It’s that magic that Sears would like to spread. “Imagine if 100 people in California were doing this,” he muses. “Or 1,000 people across the country. It would make a huge difference. People would have to notice, and things would start to shift to accommodate them. You don’t need a lot of money to do this. It’s a perfect thing for kids just graduating from college, for a summer or a year or two before they get a job. Or a guy who gets laid off work but has a little money saved up. You can live a long time like this on what you would pay for a few month’s rent in town.” 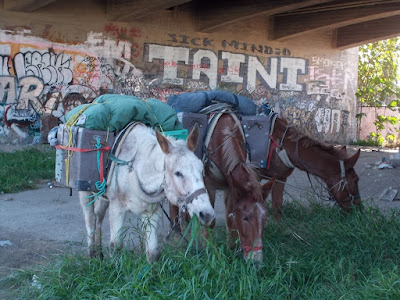 John Sears and the mules spent 12 days with us, camping on the Wind Wolves Preserve in California’s southern San Joaquin Valley in March. Most of his days were spent dozing in the saddle while the mules grazed around him. When we rode together, I had the pleasure of watching them work. The three mules don’t always line out in traditional single-file as much as they flow forward together like one being or maybe a school of fish. Sometimes head to tail on a single-track trail, sometimes three-abreast across a field, they adjust their positions and speed intuitively, according to terrain and necessity. They have spent decades navigating landscapes as different as the North Rim of the Grand Canyon to the Boardwalk at Venice Beach. Watching them travel, it’s unmistakable that John is the leader, but more in the way that your brain is the leader of your arms and legs.  John calls the group a community. It’s clear they are all connected.

“In 30 years, I’ve never had a mule slip on me,” he says, eyeing a short route up a steep hillside as an alternative to a long, lazy switchback. He rides his 22-year old appaloosa mule, Little Girl, in a home-made halter with a cotton rope for reins. She is lean and fit and outwalks most horses. He bought her as a 3-year-old from a mule breeder outside of Clovis, Calif., where he had been stabling his string over the previous winter. After learning the basics on the ranch, she packed with him all summer, mentored by the older mules. 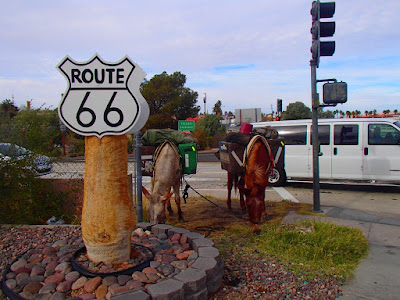 At 38 years young, Lady is the matriarch of the herd, and the bell mule. A big, rangy red molly out of a Belgian mare, Sears purchased her from legendary breeder Alan Grant in Spokane, Wash., as a 5- or 6-year-old. Grant had raised and used mules during the Depression to plow farm fields and do road work for the County, and still had a large herd. He knew a lot about the old ways. When Sears met him, he was in his eighties and beginning to wind down his breeding operation.  Sears spent the summer in Spokane helping Grant, halter breaking and gentling a group of mules that were heading to the sale at Bishop Mule Days. In the process he also got Lady broke to pack and ride. He almost sold her several years later to a sheep rancher in Nevada, but didn’t get his price, so he kept her. He’s glad he did. Now he’d never part with her. “I don’t know as much as I probably should about mules in general,” says Sears. “But I know these mules pretty good.” 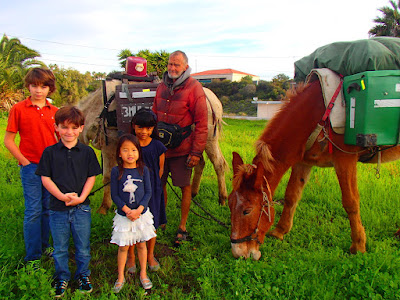 HooDeeDo, who joined the string in February, is the newcomer. He’d been an unsatisfactory saddle mule, due to his extreme attachment to the herd. His new job suits him better. With all the time the group spends around traffic, trains, and crowds of people, Sears was a little reluctant to take a one-eyed mule, afraid he might spook and cause a wreck. But with Lady getting on in years, he couldn’t pass up the strong, 11-year-old john, so he took a chance. Far from spooky, HooDeDoo has turned out to be a steady packer and his friendliest ambassador. “He’s great in a crowd, he loves people,” says Sears. “He’s my P.R. professional.”  He’s still adjusting to life on the road. Some nights he paces on the picket line, and he won’t tolerate being shod on his blind side; a problem easily solved with Easy Boots. Sears is optimistic he’ll get over both in time. 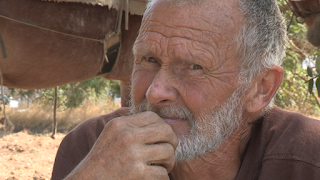 The lack of possessions has led some people to compare Sears’ lifestyle to that of a monk. He prefers to think of himself as a nomad, moving freely across the land and tending to the needs of his livestock, as traditional cultures have done for thousands of years. The mules graze as they go—in fields, vacant lots, sidewalk medians and the lawns of friendly supporters. For himself, he buys rice, beans and oatmeal in bulk, supplemented with berries, fruit and wild greens like mustard and dandelion he picks along the way. “I don’t have a house or a car or health insurance or any of that stuff society says you are supposed to have, but I’m happy, because I’m free, and I’m doing something I believe in. Even if I’m just sitting on a bucket, waiting for my black bean soup to cook, I’m happy. Because I’m free, the birds are singing, and I’m going to have dinner soon. What more do you need?”

Sarah Christie will be writing a column for Mules and More, reporting on the progress of the 3Mules.

1Source: Wikipedia
For more information on 3 Mules On A Mission, visit 3Mules.com and the 3 Mules Facebook page

A documentary, MULE: Living on the Outside, about John is in production, as well. For more information, visit 3MulesMovie.com or the 3 Mules Movie Facebook page.
Posted by cab1770 at 12:02 PM