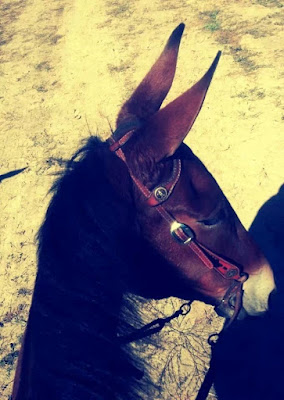 What do you say about a true friend when they are called home? There are no words to describe the depth of my love and appreciation for this little mule, Extreme Strawberry aka Berry.

Berry was there for me through it all, and I had some of the best days and most treasured memories of my life sitting on her back. For me, Shakespeare nailed it: “Though she be but little, she is fierce.” Berry was so much more than a little 14.2 bay mule; she was a warrior, a pure soul, a kind eye, a listening ear, and my dear friend.Berry and I found each other by chance in the summer of 2003. My parents, Randy and Shelley Reddish, and I were vacationing in Camden, Tennessee, at Norman Fowlers Bird Song Trail Ride. My parents were deciding to buy mules after their good horses had gone lame. They were going to be what we rode so we didn’t mess up our ‘high dollar’ animals (boy, were we in for a surprise). I was 13 years old, plundering around the barns and I saw Daiquiri, a flashy little bay mule in a dark stall. She was the only one that came up for me to pet; it was an automatic connection. Of course she was much more than dad had in mind to pay for a mule, but I wanted her. The only stipulation mom had was the name change, she wasn’t having her daughter ride a mixed drink. Daiquiri became Strawberry. 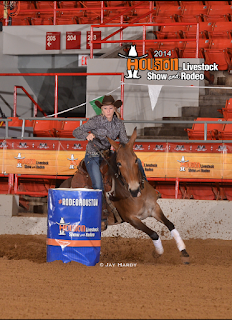 When we got Berry home my parents thought they had made a huge mistake. Berry was a horrible stall keeper…pacing frantically and rearing up when tied in the stall. She was two and only had about three rides on her, not the typical ride you want for your 13-year-old daughter. But, Berry and I put lots of miles on trails together and a bond was made. Berry was the first horse/mule I’ve ever broke from the start, so it was a huge learning experience.
One of the most comical memories I have is going up to the roping pen with my dad to pen cows. That was when I learned several things:
1) Berry did NOT like cows
2) Mules can still run away with their heads pulled to your knee, and the most valuable lesson that would shape our 13 years together
3) Little Ole Strawberry had a big motor!
My mom watched a mule doing western pleasure at a quarter horse show, and that led to our family involvement with mule shows which started in 2005. Our first show was in Shelbyville, Tenn. It makes me smile to think how far we all came with our mules. I’d never done speed events before until Strawberry, so we learned so much together. Our first show, the only game we actually knew was barrels, and we placed lower in the youth classes. I can remember trotting the poles that first year.
By 2007 Berry had people noticing us; even though our patterns weren’t perfect, Berry’s speed was showing up. I had so much support and help from the veterans when Berry and I were working out kinks that I will always be grateful to: Ed and Cindi Slemp, The Holts, Beaver Glover, Loren and Cole Basham, The Francis family, Tyler Richter, Lynn Titsworth, and others I’m sure I’ve missed.
By 2009, Berry and I had peaked and become an amazing team. Most of the time she did all the work and made me look good though, I honestly can’t take much credit. We’d gone to shows all over the United States…Ohio, North Carolina, Tennessee, Texas, Missouri, Kentucky, Georgia, Florida, Oklahoma and Arkansas. From 2009 to 2014 Berry went unbeaten in barrels except for one show where we started in Shelbyville. We were defeated by one tenth of a second (a mistake on my end due to sending her to the first barrel on the wrong lead). Berry redeemed us in poles though by winning a buckle that I still wear today as I write this. It was an extremely tough speed show competition that year and it is one of the most meaningful ones, because of that, and it was Berry’s first show back, after a leg injury (torn suspensory ligament). She was stronger than ever at that show!
Berry gained the respect of many people in the barrel horse world as well. She made her presence known and ran consistently in the 4D. Our last show was Houston, Texas, in 2014, where she won every class and gymkhana high point, like so many times before. 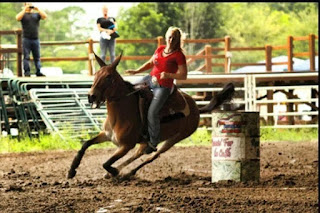 Berry was an amazing mule who touched so many people’s hearts all over the U.S. She was my “undercover weapon.” She was small and a sweetheart, but when we walked into an alley, she was a warrior. Berry had more heart than any horse I’ve ever swung my leg over, and truly fought for every win we shared together. I could literally feel her heart pounding in her chest when we were fixing to run. To know that in the next 15 to 20 seconds you were going for a heck of a ride, and putting everything you had worked so hard for on the line…and you were doing it simultaneously with not only a teammate, but your best friend. That is an indescribable feeling only she gave me. Berry loved what she did. 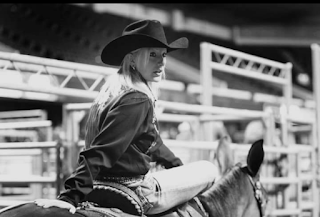 Berry was an amazing athlete who gave me everything she had and was a fighter up until she took her last breath. She was never just my mule…we were a team. She was part of me…my dreams, my happiness, my laughter, and my sanity. Berry taught me so much as a rider and a person, and she got me through so much throughout the tough times in my life. “Faith is running down the alley when you can’t see the first turn.” Berry taught me all about faith, trust, hope, and so much more. I always hoped Heaven would have good horses to ride, now I know. Heaven gained one heck of an Angel! She will always be in my heart.
RIP my sweet Strawberry. You will forever be missed and never forgotten. 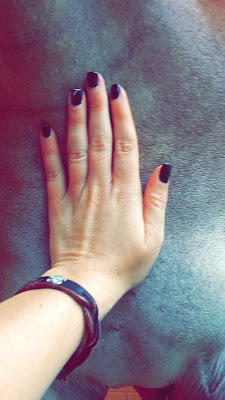