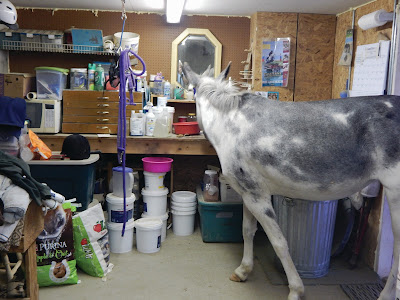 Bonnie’s our barn clown. Strolling through the tackroom or sneaking through gates is her specialty. So when she just stood still, not moving at feed time, it was obvious something was wrong

Bonnie, our 16-year-old molly mule wasn’t right. It was a cool morning, about 8 a.m. I’d just finished tossing the morning hay and was about to start picking the corral when I noticed Bonnie just standing there. Warning bells, something was wrong; she’s usually a chow hound. After a quick visual check for obvious injuries, I decided to put her in a smaller holding pen. I took her temperature, which was normal, and she had gut sounds. She wasn’t sweating, trying to roll or looking or kicking at her belly, but her eyes were really dull and she was very lethargic.
Next step was a call to our vet, Andrea “Andy” Clifton, DVM, Dr. Andy. I told her what I was observing and since there wasn’t anything specific, she advised keeping her separated and just observing her for a while. I’m one of those folks who call the vet for something like this, just to let her know there might be a problem brewing. I’ve never had a vet belittle me for this, as often we were able to catch something before it became a major issue. But I have had other horse people tell me I was overly cautious and just wasting the vet’s time. I filled a bucket with fresh water and made her a nice sloppy bran mash, which she usually slurps up. She wasn’t interested. By noon, she still hadn’t pooped, urinated, drank or touched the small bit of hay I gave her. But, still no signs of colic or a temperature. Another call to Dr. Andy.  She recommended a small dose of Banamine paste. By 3 p.m., Bonnie finally dropped a small hard pile of manure and started picking the hay. I gave her another bran mash, which she ate up.

This routine went on for 48 hours. No real indication of a major problem, no colic, no temperature. She would eat, poop, and urinate, but her water intake was very limited. Finally blood and urine tests were done and again there were a few slightly above normal, but nothing major. Currently we are still dealing with the situation.
So, here comes the main point of this article: record keeping. With all the observations made over this time period, it would have been impossible to remember what happened at what time since she was checked on at least every two hours throughout the day and several times at night.  I knew Dr. Andy would want to know what Bonnie was doing, and when. What was her temperature the first night, when did she finally poop and what was it like, when did she finally drink, etc.
With a barn of three mules and three horses, keeping track of everyone’s medical history would be a nightmare if we didn’t have a system for recording things. Often folks rely on their vet to keep track of their equines medical records, but that’s really not fair to the vet or the equine. For instance, we also use a second vet that we haul out to because he has a full equine clinic and can do things that can’t be done at the barn. When we go to his clinic, I always have our book with the medical records. That way he can see what has been done, there’s no guess work as to when they had their vaccinations, were wormed, had their teeth worked on or had any ongoing issues.
Because we have a written record of each equine’s history, our vets were able to diagnose one of the horses with sand induced colic. The mare tended to have bouts of colic every three or four months for about a year. By noting how often it was happening, Dr. Andy came up with a plan to put the mare on daily psyllium and it’s been almost two years since she’s had colic.
In Bonnie’s case, a review of her history revieled she had something similar in 2012 and 2014. We still don’t know the exact cause, but I feel a lot better knowing she’s had this before and was alright, instead of not knowing and fearing it’s something major.
Our medical records are kept in the barn in a standard notebook with divider pages for each equine. The notes are kept on a simple log page made on the computer. It was easy to do. The top line says NAME and then it’s just a page of lines. I made a bunch of copies and use them as needed. Each page is then placed in a plastic page protector. Simple! Of course you can get as extravagant as you want and there are a number of templets on line that you can use. Some folks like to keep their records on the computer, but we prefer having the pages so we can use them in the barn to log things as they occur. 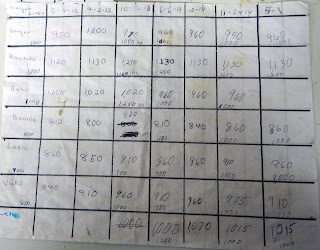 Aside from the medical log pages, our files also contain a weight chart. We worm the equines in the spring and fall and record their weight. We also do a sand check every few months. To do this, we simply put a few manure balls in a jar of water, shake it really well and see how much sand drops to the bottom of the jar. You can ask your vet to show you how to do this and what to look for. But it gives us a good idea of how much sand our equine vacuum cleaners are scarfing up and if the psyllium program is working. We have two of the six equines on a daily psyllium program and the other four are on a seven days a month schedule.
By setting up a basic medical log, it’s saved me a lot of frustration trying to remember who had what done, which equine had what medical issues and made life easier since I don’t have to flip back through old calendars or note to recall any of these items.  And, when I go out of town, the person taking care of the equines has instant access to this information which is a big asset to the vet and the equine.


Susan Dudasik is an equine journalist, PATH Intl. Certified riding instructor and a mule enthusiast. She's competed in numerous trail class events, holds clinics and teaches groundwork and trail classes at Misfit Farm in Salmon, Idaho. The advice given here is meant only as a guide. A professional trainer should handle any serious equine training problems.
Posted by cab1770 at 12:50 PM