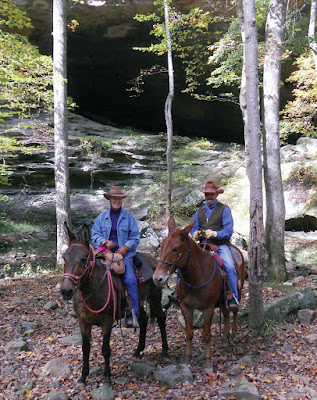 This baby boomer adventure started with Renna Moss leaving Sanger, Texas with Turbo to overnight with Rickey and myself in Sims, Arkansas, Sunday, October 20. We loaded mules, Ben and Sugar, Renna loaded Turbo, and we headed to Crystal Springs to meet Vernie Harris and his mule, Cheyenne. I normally do not trailer Sugar long distances as she is getting on in years; she was 28 years old when we made this trip. Once she gets there and is unloaded, she does wonderful, it is just the trip and standing in the trailer for hours that makes her stiff. But, she is a real trouper and did great, once she got her land legs under her she was raring to go.
Our friendship with Vernie had a very unique beginning. I wrote a story many years ago that was published in Mules and More, about my husband, Rickey and a tattoo of Mutt (his mule) on his arm. Vernie read the story when he was visiting a long time mule friend, Walt Cox in Mountain Home, Arkansas. Vernie and his wife, Jo have a son that lives between Mount Ida and Hot Springs, not that far from Sims. While Vernie was there his son was having a yard sale and some friends of ours stopped at the yard sale. They started visiting and he asked them if they knew me and Rickey; they did, and told Vernie where we lived. We still had an egg farm, and were gathering eggs one day when I heard a truck pull up to the chicken house. Rickey and I went out to see who it was. Vernie told us he was trying to find a guy in Sims, Arkansas that had a mule tattoo on his arm. Rickey pulled his shirt sleeve up and said, “Is this what you are looking for?” Vernie was surprised that he had finally found the guy with the mule tattoo. After visiting with us and seeing where we ride, Vernie decided to bring his horse, Montana, and ride the mountains behind our home. He and his wife still live in Flippin, Arkansas, but eventually bought land and built a new home in Royal, Arkansas. Since then we all have become friends and he has become one of our trail riding group that meets twice a year at our place. At least once a year we trailer to a horse camp and meet to ride other trails. Now, his friends are ours and our friends are his. 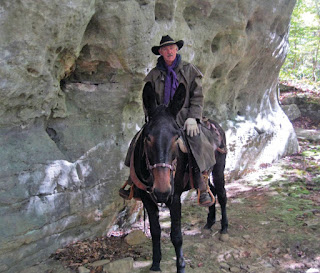 After we met Vernie in Crystal Springs we caravanned through Little Rock and on to Memphis, then north to Illinois. The same day, Tom and Ruth Niles left from Caulfield, Missouri with their horses, Jessie and Shadow. Ruth is a sister of Renna. One of her other sisters, Rita Rasmussen left Mechanicsville, Iowa with her horse, Casino; she and Casino met another sister, Rhonda Hintermeister, her husband Kevin and daughter Jessica on the road from Muscatine, Iowa. We all arrived at Bay Creek Ranch that afternoon. This was not only a riding trip, but a family reunion for the four sisters.
Ruth and Rita had birthdays in October so we had a birthday party for them the first night. This was the first time the four sisters had been together in a long time. We all share not only a love for trail riding, but a great camaraderie and friendship.
The next day I loaned Sugar to Rhonda so she could ride with Renna, Ruth and Rita. Rhonda does not have a horse, so I stayed in camp so she could ride with her three sisters. This was the first time since they were all kids at home they had ridden together.
Since Kevin does not ride, the highlight of his day was to count the times the owner of the horse camp came around in his golf cart. We had left the front door open as we were unloading and the heat had been turned on. The owner happened to come by and see the door was open, so he went in and turned the heat off; he was not a happy camper. Then it turned cold and I had to go ask him to please come and turn the heat back on. The cabin we stayed in was adequate for our group and had a lot of sleeping areas. Most of the activity though was centered around the kitchen and dining room.
The group rode 8.6 miles the first day. Rhonda and Sugar got along great. The second day we headed out and rode over 16 miles; that was a long day. We did not have a great map of the trails, so Renna was designated as our trail guide. We rode through lots of big rock and ended up in a box canyon by Peter Cave; the scenery was absolutely beautiful! 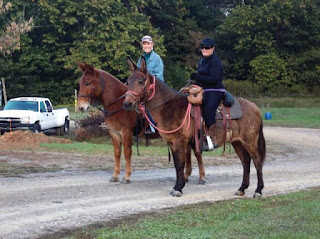 Audrey Beggs on Ben and Rhonda Hintermeister on Sugar

Wednesday we headed north to a trail we were told was very pretty, and boasted two caves. We rode across Maxwell Ford, watered the mules and horses, and then rode on up the trail. The scenery was just as gorgeous as we had been told. The first cave we came to had vines hanging over the face of the cave and nearby was a hanging tree with a rope. We wondered if anyone had ever been hanged on that tree. We decided this must be Fern Cave; not any ferns except near the trees at the front of the cave. Then we rode on down the trail to Sand Cave. We were able to ride the mules and horses into this cave. A beautiful area, and a great place for a photo op.
Thursday we rode in search of the Jackson Falls Loop; this trail is very treacherous, extremely scenic and took us deep into a very remote area. A lot of rock climbers seek out this area and we did see a couple of guys who were rock climbing that day. We followed the east side of the railroad, but the noise from the trains made the mules and horses extremely nervous. There were square cement culverts that ran under the railroad.
The whole area has an abundance of huge rocks; we had to cross one area that was almost solid rock. This was not a time for your mount to be afraid of rocks.
When we got back to camp Rita wanted to ride Ben, as she had never been on a mule. I rode Sugar and she rode Ben around camp for a few minutes. Ben is one of our ‘go to’ mules and is safe for anyone to ride. As most everyone is that rides Ben, Rita was very impressed with him. At that time all of the sisters had ridden a mule except Renna. But that has now changed, as she has borrowed Ben a couple of times when Turbo was having issues and she didn’t want to ride him in the mountains. Erin, Renna’s daughter has also ridden Ben, and she and he got along great. As Rickey like to say, “Ben is one of those animals that will make you smile even if you are having a bad day.”


Kevin, Rhonda and Jessica left on Thursday morning to head home. Before they left for Iowa we got Jessica to get in the saddle on Sugar, as she had never been on a horse or mule. I think it was a little scary for her at first, but she had a smile on her face as I led her around.
Tom’s trail riding got cut short as his mare developed a sore place under the saddle from the ride on Thursday; he was not able to ride with us on Friday. 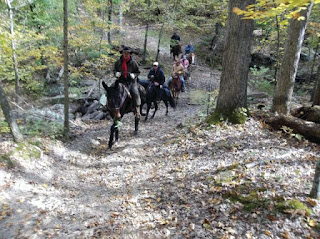 Friday morning we woke to a cold 27 degrees, so we waited until after 9:30 to ride. At that time it still was not a heat wave. We rode along the train trestle again. Renna yelled for me to bring Sugar up and lead them through the trestle tunnel; I don’t think Turbo liked the looks of the dark tunnel with water standing in it. Sugar was brave and she and I led the group under the train tracks of the Illinois Central at the Tin Whistle overpass. After hours of riding toward what we thought was Cove Hollow, we ran out of trail markers.
The guys all wanted to ride through the cement culverts, under the railroad tracks. These were full of water, and the rest of us refused. That turned out to be a good call as we met a guy on the trail that told us there was a 30 foot drop off at the end of those culverts. While we were wandering around in the woods, trying to find a trail marker, Rickey and Vernie kept us entertained with their singing.
We made it back through the Tin Whistle, across the dam and back to camp; that turned out to be our longest ride yet…17 miles. A lot of miles for us baby boomers.
Saturday we got up early and headed home. It was raining when we got back to Sims. Renna and Turbo spent the night with us, it was still raining when she pulled out for Texas the next morning.
We hit the jackpot, as we had five beautiful sunny days of riding in the Shawnee National Forest. After I got home and looked at the map and the places we had ridden, I realized it was only about 30 miles from Smithland, Kentucky, the birthplace of my paternal grandmother. What a coincidence that I was that close and didn’t realize it. 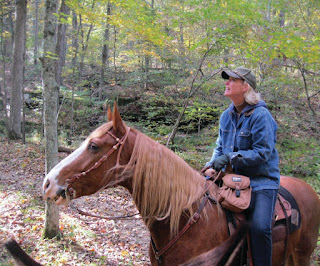 Our next trip was to ride the Buffalo National River area in 2014. A story about that trip will be written next.  Life is a journey…enjoy the ride!
Posted by cab1770 at 11:30 AM