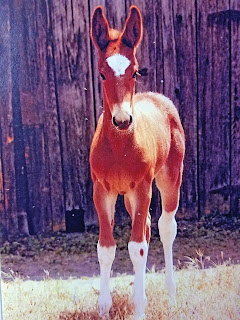 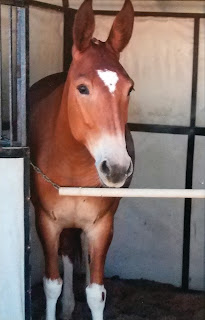 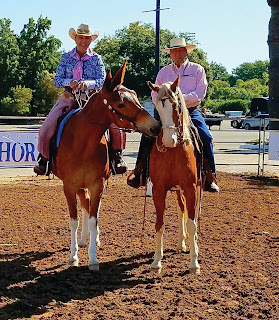 For those of us who own mules, we are never surprised at how well they can perform when up against other equines.  I am fortunate enough to be one of the founding partners of the fairly new, but highly popular discipline of Cowboy Dressage. It has been an amazing journey creating a discipline that is inclusive, not exclusive. Where a rider’s soft feel and partnership with their equine is paramount. It’s no surprise that mules excel in this discipline. The past two years at the Cowboy Dressage World Finals, mules have dominated the Top Hand Competition. In 2016, Audrey Goldsmith, Sisters, Ore., rode her mule, Heart B Porter Creek to an amazing win in Top Hand, Kellie Shields came in third on Call Me the Fireman. In 2017, Kellie came back and maintained a strong lead throughout on her mule, Fireman. In both Top Hand competitions, there were only two mules competing and several horses. Part of the Top Hand Competition is the rider switch – the riders who rode these mules as their switch ride were amazed at the level of training and rideability. Because these mules were out in the general public, folks have taken notice that there is another option for something wonderful and fun to ride – a mule!


My own personal journey with mules started when I was a small child.  My first ride was my grandmother’s pack mule.  He taught me a lot! 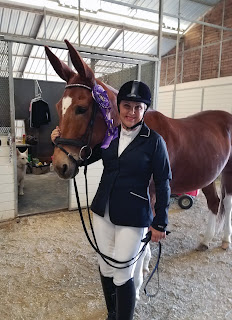 In 2013, my husband John and I were looking for a mule for him. Kellie contacted Kathy Rohde to see if she had a nice mule for sale. That is how we met and acquired Roman IV’s Ima Big Star. Star was five years old and 16.2 hands.  We were in love. John asked me to train her for him, so I started putting on a foundation based upon my background in dressage. We started using Star at various expositions up and down the West Coast to spread the word about Cowboy Dressage. She was a super star every time out. She amassed quite a following of admirers and fans. She also excelled in Cowboy Dressage, where she was developed slowly and carefully. This summer I needed a new goal, something for myself. John had been struggling with a bad knee for several months and it was finally surgery day, June 29. While waiting for him to get through surgery, I decided to dip my toe back in the traditional dressage court. But who to ride? I had sold my FEI level warmblood, so was searching – then I remembered! Dressage is good for any equine – what about Star? We share an unusual connection and partnership – she knows what I am thinking most of the time, I swear! She is lovely with lovely gaits. OK, Star it is…now the work begins. I travel most week-ends teaching Cowboy Dressage clinics throughout the US, Canada, and Australia, so fitting in the required number of recognized USDF/USEF sanctioned shows was no easy feat. It was amazing to me that every time out, we received a qualifying score. In two months time we were able to qualify for the California Dressage Society State Championships and the United States Dressage Federation Region 7 Championships to be held in September at Murieta Equestrian Center, Rancho Murieta, CA. I was so proud that we qualified, so of course we were going. And, go we did. 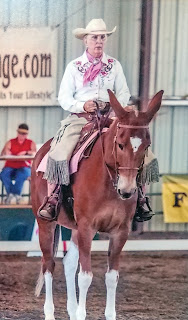 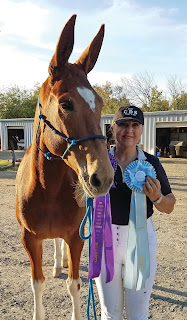 But first let me tell you that a year ago Star suffered an injury to her hock that looked to be career ending. Finally, in February 2017 my vet contacted me to say she had learned of a new procedure that might help Star and asked if I were interested? Of course! We tried the procedure and amazingly, it worked. Star was back to work, carefully. I wasn’t sure how much she could take or if she could hold up to harder work. I was careful and brought her along slowly. She was doing well, so I started asking her to go forward, paying close attention to the correct use of her back and topline, since her back is a little long. Star has always been really connected to me and tries so hard to accommodate me. I am always humbled by her heart and try. When showing her in dressage, I was surprised that judges often commented on the harmony and partnership that we demonstrated, something they don’t often mention. I know we have a special relationship, so it was no surprise at the Dressage State and Regional Championships we did very well. There were 335 spectacular horses who all had to qualify to attend, and our lovely mule (who also had to qualify)! We ended up tenth in the State of California for Open Training Level, and eighth in USDF Region 7 (Nevada, California, Hawaii). She did it all with grace and class. I was so happy to place among all the lovely horses that were competing.  It was an honor and so wonderful to be part of this very large show. We had so many people who were curious about mules and ended up really loving what they saw. The frosting on the cake was we just learned that Roman IV’S Ima Big Star has been named Open Training Level mule of the year for the USDF All-Breed Awards program. This award is sponsored by USDF and AMA together for the top scoring mules competing in dressage. I am still in shock at how well we did, not because I don’t think she is awesome, but because we were up against some truly amazing competition. In all my years of training horses, I have never shared the type of relationship I share with my mule. I have trouble explaining to people why I ride a mule. It goes deeper than words. She is my partner and my friend.