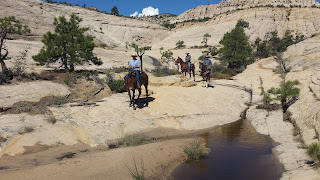 story and photos by Steve Westhoff
Boulder, Utah, is fairly well known, at least locally, for being the last town in America to receive their mail by mule train. Sometime around 1933 a road was finally built to the town with the help of the CCC, but prior to that it was pack mules. The trail leaves from Escalante, Utah, and goes more or less straight to Boulder, which is 16 miles away. The trail crosses three canyons, by far the deepest and steepest is Death Hollow. The old timers say in their diaries they rode between towns in five hours, but when I went across it the first time last year it took me 10 hours.
It has become a popular hiking trail but very few people I know ever ride it. Part of the reason it took me 10 hours was just finding the trail on that much slick rock was a challenge and nobody has cleared the trail through the bottom of Death Hollow for a very long time. It was very slow going.
The scenery was incredible and the historic trail was amazing to me, knowing they used to take draft horses and mule trains through these canyons. 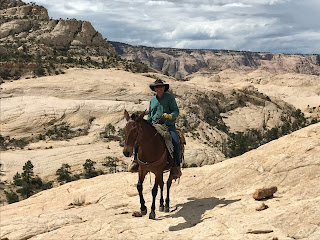 One of the stories I’ve read was that a local pioneer farmer was leading his two draft horses through Death Hollow. The Boulder side of Death Hollow has a very narrow slick rock trail with exposure that is several hundred feet. Thinking it would be better to take his horses across the narrow trail one at a time, he stopped, tied one of the horses up, led the other one across and tied him up. He walked back down and across to get the other horse, started back up across the trail and met the one he had taken over first, half way down across the trail. He had to back the first horse up the trail while he led the second horse. None of that would be for the faint of heart.
Escalante is well known for the Hole-In-The-Rock trail where a group of Mormon pioneers spent five months building a wagon trail across the 2,000 feet deep canyon of the Colorado River. Some of the lesser known trails like the Boulder Mail Trail almost go unnoticed. 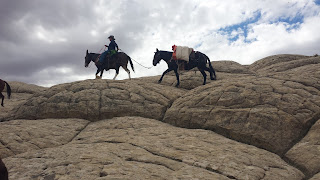 Escalante and Boulder are in Garfield County which is nearly 97 percent public land. With the Canyons of the Escalante River, side canyons of the Colorado River, and Boulder Mountain over 10,000 foot in elevation it is a mule riding paradise, which is evidenced by the pictures accompanying this story. 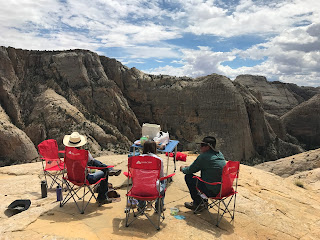 “We ranted and raved about the trail enough that our wives wanted to see it,” said STEVE. “So we rode in the Boulder Mail Trail until we got to the Death Hollow overlook and had a picnic. It was a long, beautiful day.”

Many stories of this area can be found in local historian Jerry C. Roundy’s book,  Advised Them to Call the Place Escalante. Lodging for horses and mules, guests and trailers can be found at Escalante Cabins & RV Park (www.escalantepark.com) on the west edge of Escalante, which I own. I have been ranching here locally for 20 years, own five mules and a horse. I have a wealth of knowledge of trails and these parts. Feel free to contact me if you would like ride these beautiful canyons. 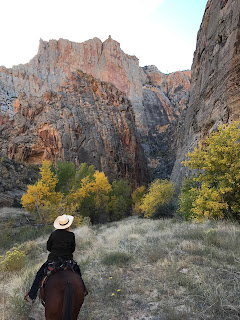 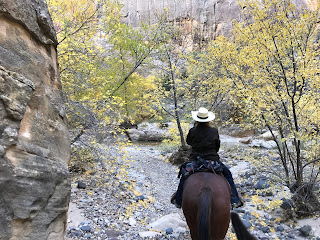 These photos were taken in the fall on a different trail down through the Escalante River Canyon, between town and the bridge on Highway 12